It was a wedding that, at the time in 1999, seemed to capture the attention of the whole world.

The closest thing to a royal wedding without any actual member of the royal family getting married, the wedlock of David Beckham and Victoria Adams was an iconic moment in football’s relationship with pop culture. The groom was one of the hottest properties in world football, having just played a crucial role in Manchester United’s historic treble months earlier.

Accompanied by Gary Neville as his best man, whom Beckham dominated the right flank of the pitch with for many seasons, he and Victoria, one of the most famous pop stars in the world thanks to the Spice Girls’ fame, tied the knot before a star-studded guest list… and OK Magazine. 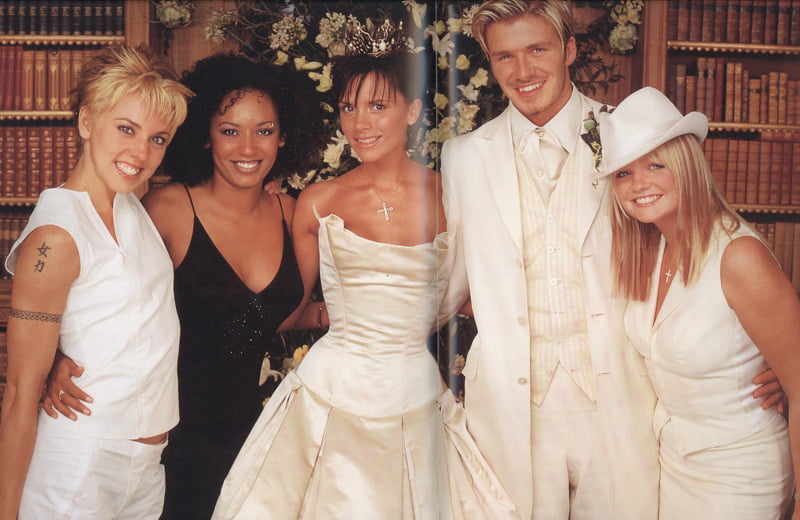 A wedding reported to cost around half a million pounds, saw the majority of Manchester United’s playing staff on the invite list, along with the likes Elton John. Married in a picturesque Dublin castle, the Bishop of Cork married these two superstars, confirming their coronation as the unofficial King and Queen of pop culture.

The BBC reported on the wedding:

‘As the party continued well into the night, hundreds of well-wishers and the British media had to content themselves with waiting outside the high wall of the 560-acre estate.

But they were able to join in at least a part of the festivities when a spectacular firework display lit up the night sky to round everything off with a bang.’

Better than the fireworks, though, had to be the outfits. Pre-millennium fashion at it’s very best… and worst.