Paul Gascoigne in Italy: 4 of the best moments

When you put together Paul Gascoigne and Italy, two things usually spring to mind.

One is Italia 90, the iconic World Cup in which Gazza became a national hero for his performances and his symbolic tears as England bowed out in the semi-final. The other memory is of his time at Lazio where, having signed for the Roman club on this day (August 1st) in 1992, the midfielder spent 3 years playing in Serie A are remembered by outrageous moments, mixed form and some major injuries.

Whilst out of action, the England star was kept busy with TV work and the general adapting to life, culture and language in Italy. Whilst his time at Lazio may not have been the success fans would have hoped for, he left us with some great moments to savour – moments that will last forever thanks to grainy YouTube videos.

His finest goal in Italy…

Whilst his off the field antics meant that he wasn’t too popular with Italian press or even his own president, goals like meant that the fans loved him.

In his first season for Lazio, he gave a glimpse of what could be…

His outfit when he arrived… 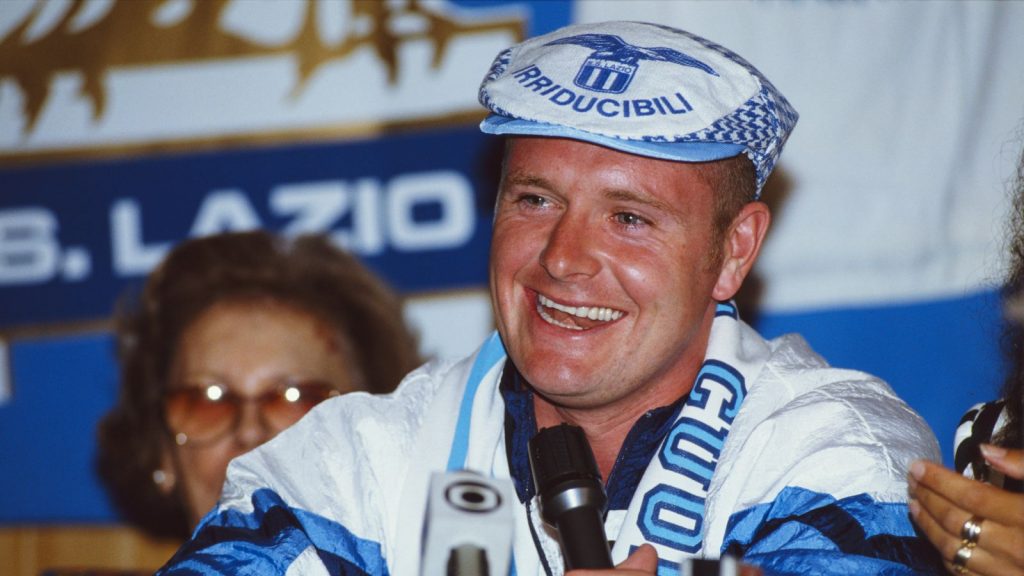 Having been let out of the squad or a crucial game against Juventus, Italian media were keen to get an angle on the story from the player in question.

His response? A very, very short quote that landed him in trouble with his club president, who fined him £9000.

His 89th-minute equaliser in the Rome Derby

Football rivalries don’t come much more intense than the Lazio-Rome derby, even for a player who knew all about the North London derby and later, the Old Firm derby, too.

But for a player still trying to prove his worth to the club, there was no better game to make an impact in. And, that’s exactly what Paul Gascoigne did, rising above everyone else to head in this last-minute equaliser against Roma. Cue scenes of intense joy.