Wiener Derby: A rivalry fuelled by coffee and class

This article is from the latest issue of Life After Football, available to buy here with even more amazing photos by Sander Wesdijk.

Who doesn’t love a derby?

Whether you feel every kick and every tackle personally, or simply enjoy them from a (safe) distance, you can’t beat the unique context that footballing rivalries provide. Particularly with local derbies, like this one in Vienna, the rest of the footballing world becomes irrelevant. League tables are put to the back of the mind, team form is screwed up and thrown in the bin or more so, seared and burnt by the raw heat of a flare.

For the Wiener Derby is as feisty as local rivalries get. In the week prior, the Austrian Bundesliga table does not hold the same importance as being the winner of this derby does – even training sessions can see sets of supporters cheering on their players. It is the oldest derby on mainland Europe with FK Austria Wien and Rapid Wien meeting on 328 occasions, dating back to 1911.

Rapid are the most successful club in the country with 32 championships being won by the Green-Whites. This is not to say that Austria Wien’s trophy cabinet isn’t lacking for shine, either, with 24 Austrian Bundesliga titles and both clubs boasting a record that shows no relegations. These are truly the biggest they come not just in Vienna, but in the entirety of Austria. 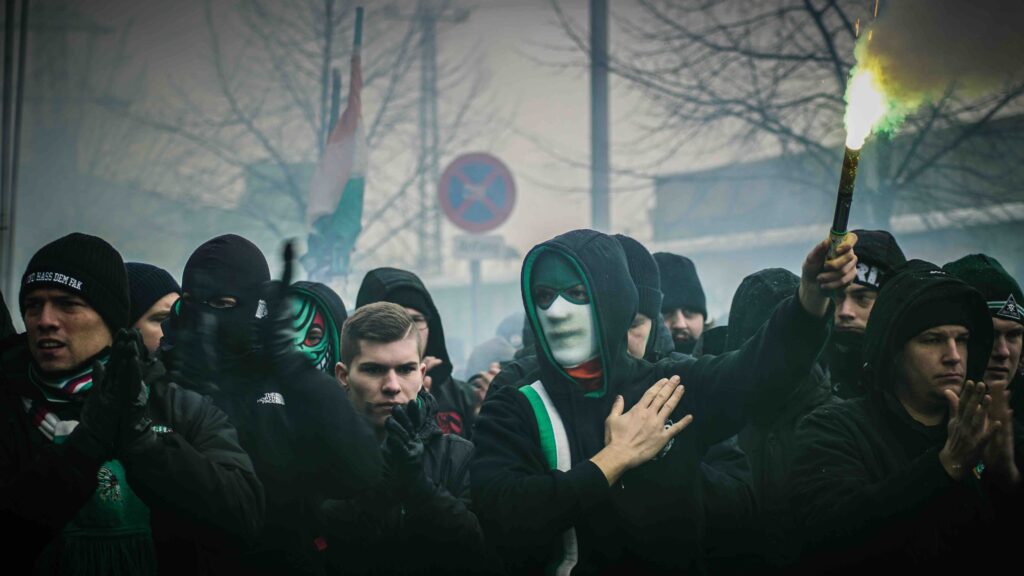 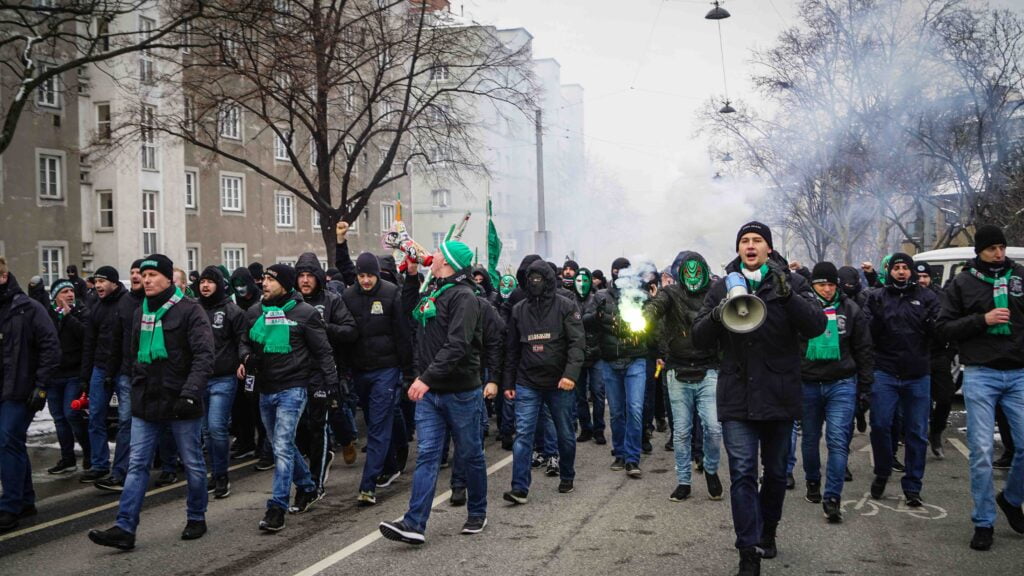 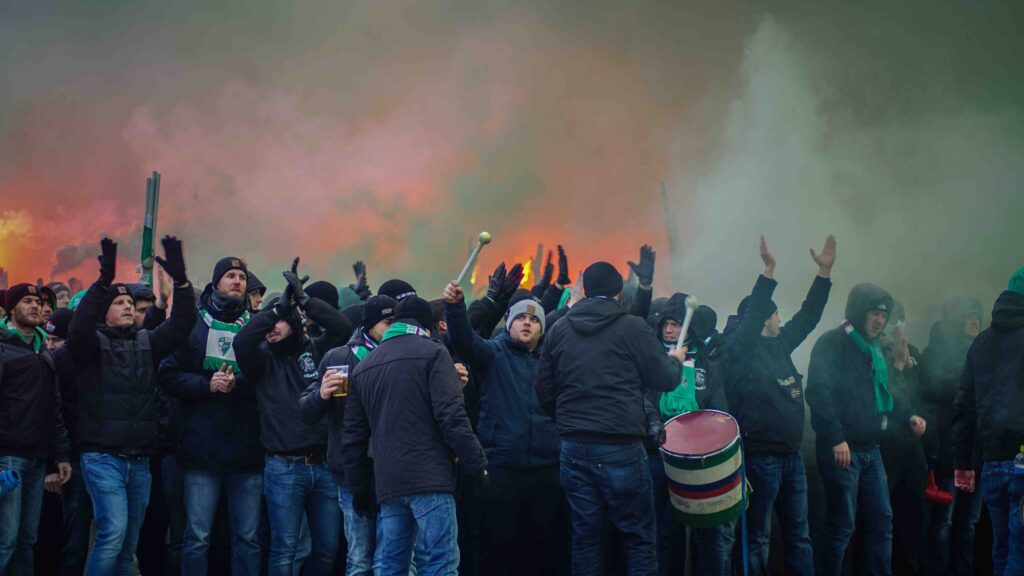 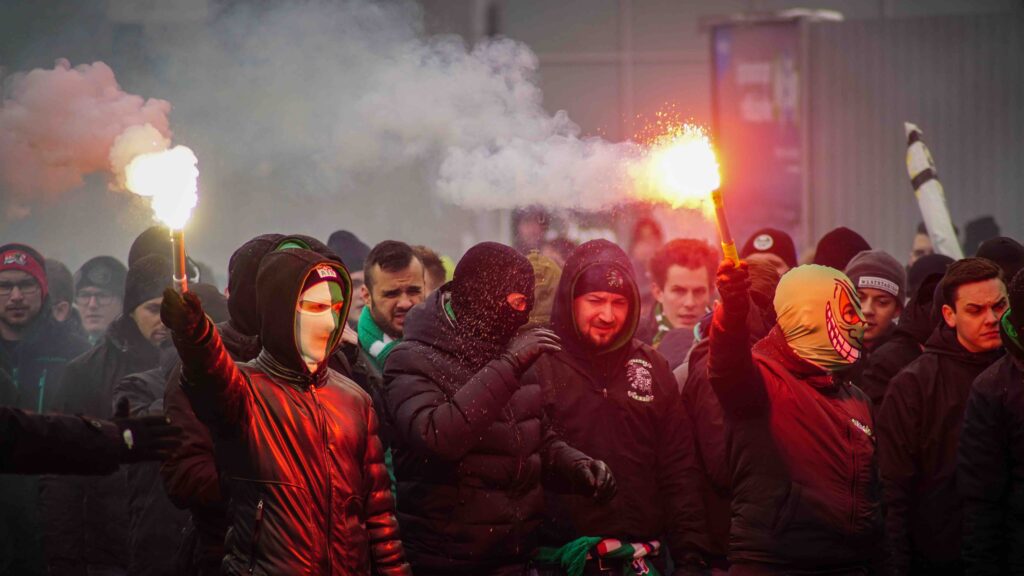 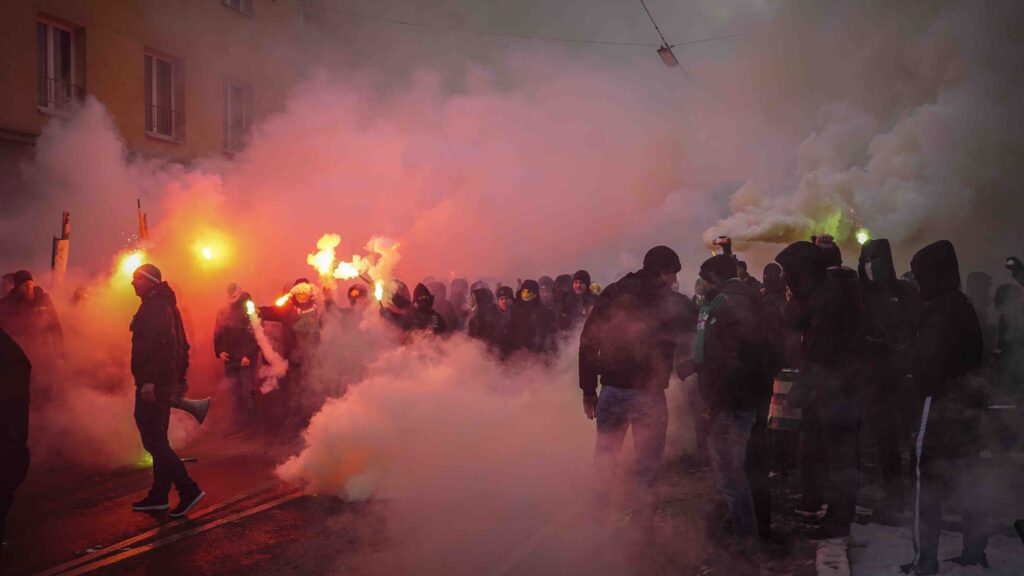 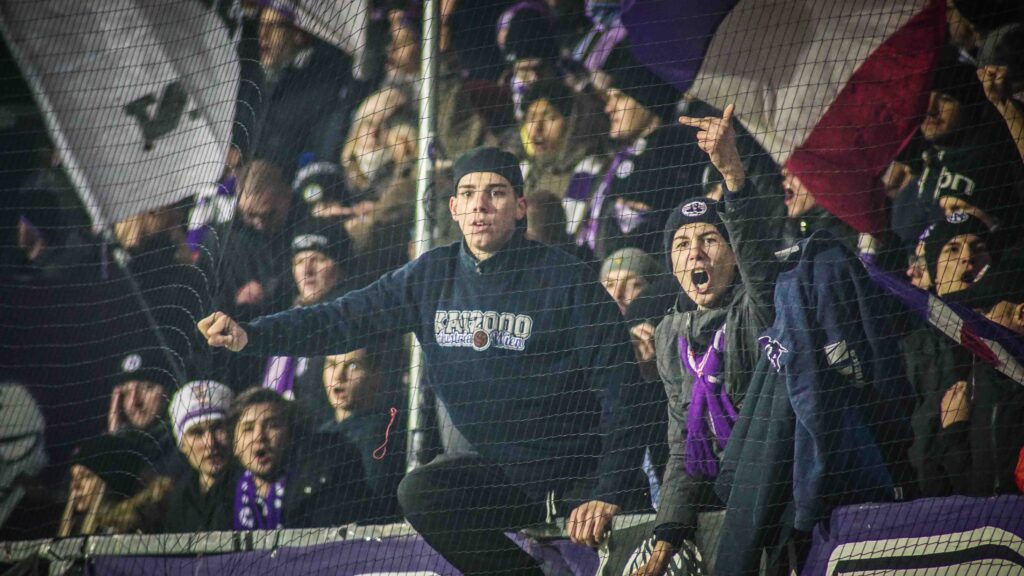 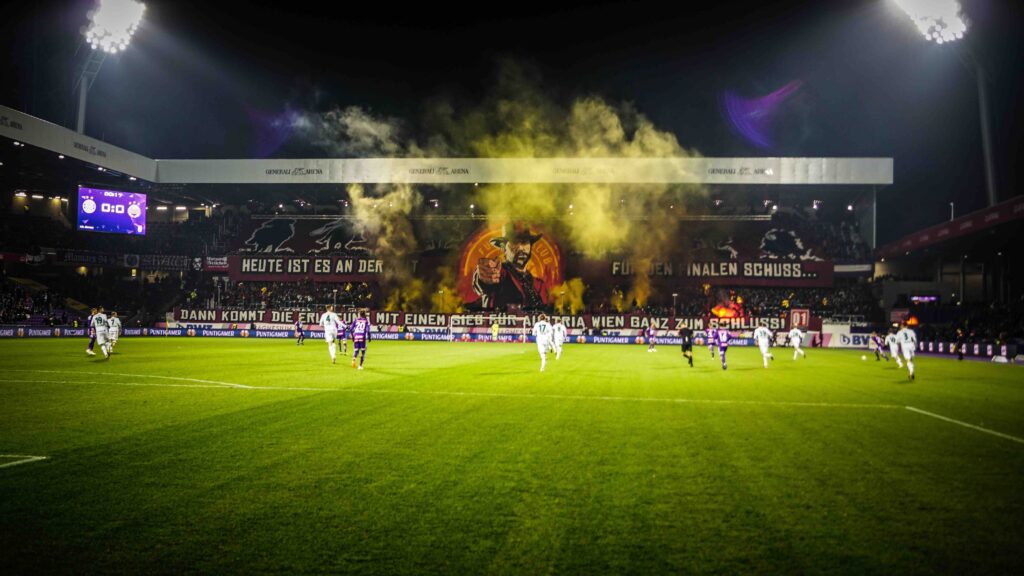 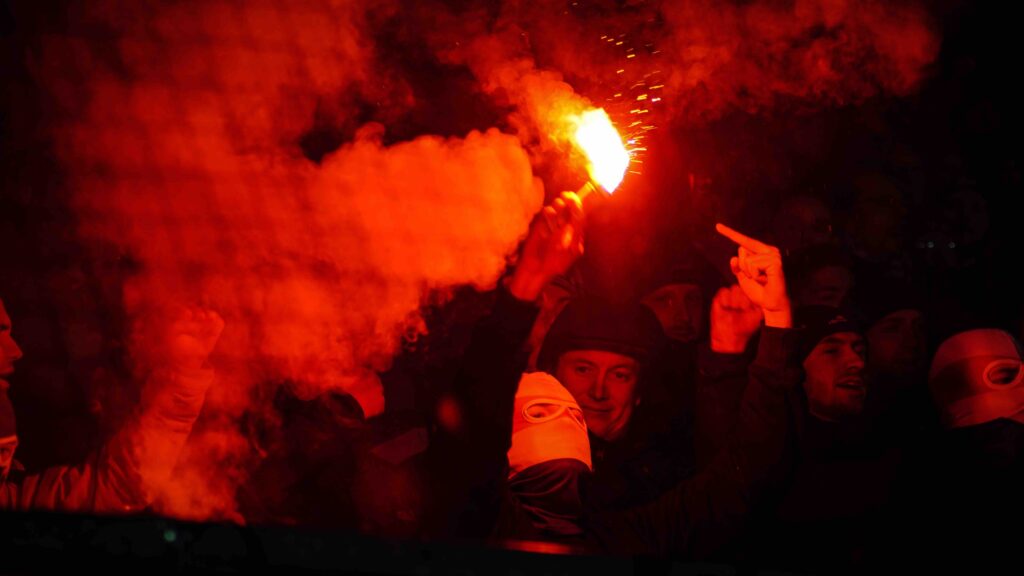 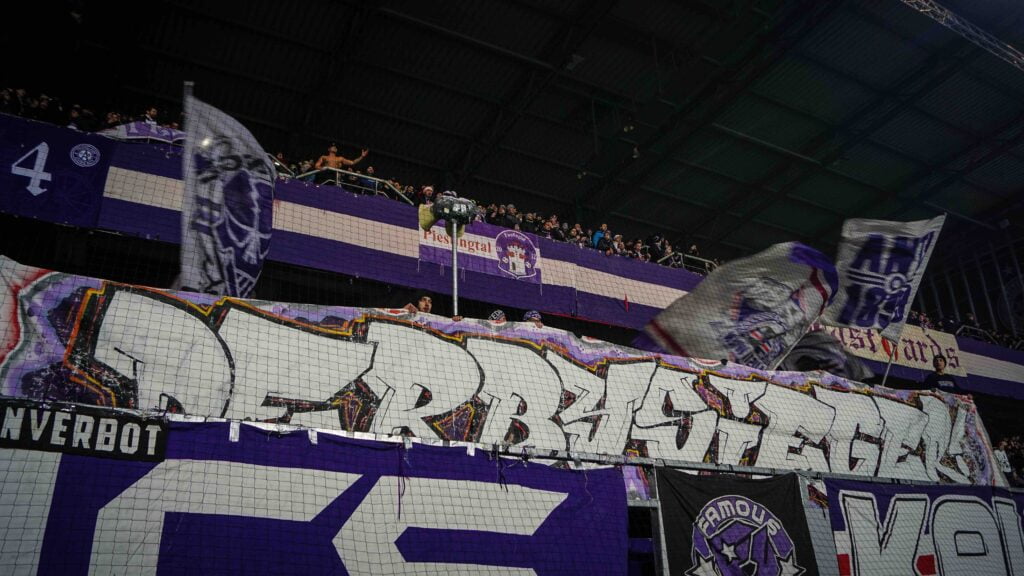 But rivalries never exist based on success alone. There is always extra context, famous back stories and inner-city geography that adds fuel to the fire and as it goes, the wearing of either purple or green aren’t the only things that separate these two clubs.

Both actually originate in the West of the Austrian capital, being founded in Hietzing of the 13th District of Vienna. Although Rapid have moved further South, the origins of both clubs means that in general, the west of the city is the most divided between purple and green. The North West now tends to cheer for Austria, leaving the South West for Rapid, but geography, bus and tram routes are minor details compared to the social class that each represents.

Austria Wien is historically associated with the coffeehouse culture that Vienna is so famous for – a culture that saw the elegant coffee-houses of the city become extended living rooms of young writers and creatives during the early 20th century when the club was created. Legendary literature and important schools of thought were born in iconic spots like Café Griensteidl and Café Central, fuelled by caffeine and intelligence. Austria Wien was the club of these spots and the ‘Jung Wien’ that was growing up, forever attaching a more middle-class and well-educated reputation to Die Veilchen (The Violets).

On the flip side, Rapid Wien represents the working class Vienna. Whereas Austria represent the intelligentsia, Rapid embody the less documented but more industrious side to Vienna. The club takes great pride in it’s proletariate roots, founded as the First Viennese Workers’ Football Club in 1897. These social classes that divide the two have come to define the football that is expected.

Rapid’s football is proudly more robust than that of Austria, who take as much pride in playing aesthetically pleasing passing as Rapid do in their aggressive, hard-working displays.

Differences are settled on the pitch and in the stands, as chants ranging from jovial to controversial ring out from both purple and green heavy sections of the stadiums during derby day. Shirts of the opposition are placed upside down as a gesture of disrespect during a derby that, despite always being heated, has had the temperature turned up even more in recent times.

Back in 2006, Austria’s goalkeeper Joey Didulica became national news when a clumsy challenge on Rapid’s Axel Lawaree broke the striker’s ‘jaw and more.’ He was fined and found guilty of assault, but greater implications were the intensified hatred that Rapid fans now had for their fellow Vienna residents. The success of Red Bull Salzburg recently has made these two less dominant and, rather than cooling the rivalry, it has made these two games per season even more important to the respective sets of fans.

If you’re part of the Wien Derby, nothing else really matters.