MLS giants, LA Galaxy, have just unveiled one of their new looks for 2019, with Zlatan playing his part in the release.

Coming with a super futuristic, digital-looking pattern, this brand new away strip will be one of their looks for the upcoming 2019 season, in which The Galaxy will be hoping to add a sixth star to the five stitched above the crest of this new jersey.

The combination of different dark blues is strong on the front, looking like a modern twist on the classic stripes that have adorned football shirts for many years. On the back, the design is a little more spaced out, leaving room for the big names that they have printed on them. None come as big as that of Zlatan Ibrahimovic and the big Swede will be spearheading The Galaxy in whatever shirts they are wearing this coming MLS season. 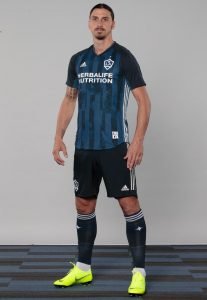